What are the ethical obligations of a school district and the teachers’ union to its students during the pandemic?

Cancel Culture at Work Again It appears the San Francisco Unified School District Board of Education (SFUSD) has plenty of time to vote on changing the names of schools but not enough to ensure that the districts’ schools can open safely. Rather than spend time figuring out the best (safest)... Read more →

What are the Challenges of Switching to E-Learning During COVID-19?

Creating an Effective E-Learning Environment Imagine if the pandemic had hit five years ago. We would not have been able to switch to an online course structure with no live interaction. That would have been a true disaster. It’s hard enough to engage students in the learning experience, but since... Read more →

Is Our Personal Information Ever Safe From Google?

ORDERING PIZZA In 2021 This is a new kind of blog for me. I read this piece and couldn't resist republishing it on my blog. It speaks volumes about the lack of security for our personal information. Before long, Google will know our thoughts -- even in advance of having... Read more →

The Absentee President To say President Trump has checked out since he lost the 2020 election is an understatement. Since the final tallies were completed, and it was clear Trump lost the election (at least in everyone’s mind but his own), he has failed to carry out his responsibilities as... Read more → 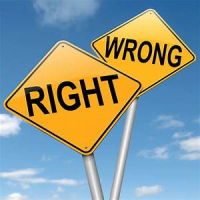 Let Your Conscience Be Your Guide??? Yesterday's insurgency at the U.S. Capitol demonstrates why situational ethics is killing America. No civilized society would condone the storming of the U.S. Capitol. How do we explain it? A small group of people thought it was the right thing to do. Following numerous... Read more →